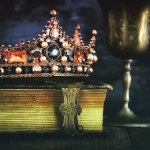 On this first Full Moon join me as we rightfully restore the presence of Sophia to the Temple of Solomon. This great wise king was considered to be married to Sophia. One of the many layers of symbolism attributed to the Song of Songs is that it speaks of Solomon’s marriage to the Holy Sophia. Wisdom 9:8-11 even tells us that Sophia instructed Solomon to build the First Temple of Solomon, so She may dwell amongst him on the earth. The Temple of Solomon was a Temple to Sophia. The Holy of Holies was where She dwelled.  There was an enormous statue of Sophia with a great bronze serpent representing her power in the central courtyard, where all who came to worship would practise rituals and healings as overseen and blessed by this great Heavenly Queen and Earthly King. This IS the Template for Balance and Harmony on this planet. Let us envision the continuation of this Temple planting seeds for a near-future divine abode.