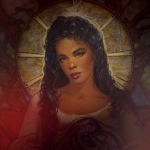 The Magdalene Cave, near Rennes les Chateau is a supposed place of refuge that the Templar Knights guided Mary Magdalene to as she made her pilgrimage from Saintes Maries de la Mers towards the real 'hiding place' deep within the Pyranees of the Ariege.

Not only was this cave a refuge for our lady, but also a potential burial site, a place where she buried something of significant value. This is what the legendary priest of Rennes les Chateau hints towards. He suggests that a map was found during some renovation work on his church, a map that revealed the location of this cave. No one knows whether he found anything or not, but we do know that he received a huge amount of money from some mysterious source shortly afterwards, money that he used to turn his village and church into a living shrine of the Magdalene.

The Magdalene Cave is also situated within the Pentagram as discovered by Henry Lincoln in Holy Blood, Holy Grail. This is a mystical portal mapped out into the land by five mountainous peaks. May of us in the region call this pentagram The Venus Temple, with its epicentre at La Pique (another transmission)