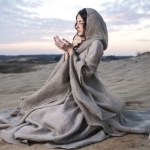 Let us meet the Virgin Rebels and Desert Mothers and receive a transmission and a half from these wild women who have been written out of Christianity’s early history.

Many of the female leaders of Christianity—in the Catholic Church in particular, with its 1.25 billion followers around the world—are barred from being fully ordained and are closely overseen by men. But this was not always the case.

Scores of early Christian women—like Marcella, the desert-dwelling Susan, or the scholars Melania and Paula— embraced radical lives helping the young true essence of The Way out across the Roman Empire and beyond.

Perhaps you long to hear their message?  Perhaps you thirst to feel and taste their feverish ecstasy of dwelling in union with the Risen Christ? You know, however, they were walking the Christ Path, and experiencing a similar, if not, exact same quality of transfiguration from within themselves!

From the beginning, the followers of Jesus of Nazareth comprised a movement that was extreme, countercultural—a revolution that embraced both men and women, even social outcasts and slaves. In those first centuries, while the religion was still defining itself as an institution, many devout women flouted cultural convention and chose Jesus himself—not bishops and bureaucrats—as their personal guide. These women had permission to live beyond their gender as the leaders and patrons of local congregations, as preachers and ecstatic prophets and tough ascetics. They defied Roman family laws and rejected their sexuality. They walked the streets, spreading the gospel. They taught themselves Hebrew, analyzed Scripture, corresponded with other Christian leaders. They were aristocrats who seized control of their money and funnelled it into the movement, building monasteries and helping prisoners and the poor.

Christianity took shape with the support of these female leaders and mystics and activists. But what we have left of them now are only the remembrances of a handful of men.

Let's get to meet these wild, devoted and activist women, Christianity was never meant to be such a docile and safe tradition that requires only a weekly visit to the local church!

This transmission is pre-recorded and sent out on the day. You will receive a PDF and Audio file that is yours to keep.