At The End: We Shall Return 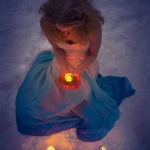 At The End: We Shall Return

This transmission will be a merger of "At The End" a grief ritual to really connect with what has been lost, broken, harmed and ended because of this year, and "We Shall Return" the fulfilment of the Cathar Prophecy. In 1321, 21st August at 8 am, the Last Cathar Parfait, Guillaume Belibaste, was burned at the stake by the inquisition, in the Occitan region of Southern France.  As the flames licked around him he was enshrouded by the intense rapture and inward protection of almighty God to pronounce these immortal words: "At the end of seven hundred years, the laurel would turn green again."

The laurel is sacred to Apollo and was the very symbol of prophecy which Apollo held sacred. In Greek mythology, Apollo is represented wearing a laurel wreath on his head, something that only Julius Ceaser continued to do.

Cathars considered the Laurel to be the sacred symbol of pure love. When inquisitors executed Cathars, the Martyrs said: “the laurel wilts, pure love dies.” But they possessed holy faith and knew one day the Laurel would not only return again but flourished in an age that welcomed it.

The Cathars lived according to the virtues of early apostolic Christianity: unlimited kindness, perfect purity, sacred love, peace, divine wisdom and divine justice.  In my heart, the Cathars are the spiritual descendants of Mary Magdalene, who came to France, where she continued to speak, heal and baptise based on her first-hand revelations from the Holy Land.

During this transmission, spoken at the bottom of Montsegur, (last Cathar stronghold) I will weave around and within you the stories, prayers, music and faith of the Cathars, so you too can stand at the threshold of this New Year, knowingly entering it filled with the grace of the Holy Spirit.

This transmission shall be both LIVE and Recorded