Transmissions:
Order of the Dove
Five Wisdom Dakinis: Accepting What Is...22-02-22 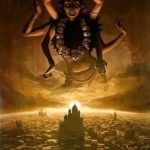 This transmission will create an inner sanctum where we can safely-(ish) approach the Five Wisdom Dakini’s. These five appear in the Bardo Thödol during the first five days in the bardo, (death).

Women, ALL Women, are ultimately, some kind of Dakini manifestation. Here is a transmission where we can fully meet and accept this.
Dakinis are energetic beings in female form, evocative of the movement of energy in space and might best be described as a female embodiment of enlightened energy. If one wishes to reach a state of enlightenment, we must invite the Dakini into our lives.
I believe the welfare of this planet and its beings, our human race must connect with the feminine energies within ourselves, irrespective of gender. Embodying the different characteristics of the dakinis from the Tibetan culture.
Dakini in Sanskrit, Khandro in Tibetan, literally means “sky dweller” or “sky dancer,” and is the most sacred aspect of the feminine principle in Tibetan Buddhism, embodying both humanity and divinity in feminine form.
Dakinis may appear differently in various contexts; when needed, she may appear fierce and intense or playful and nurturing. At other times she may seem outrageous or repulsive to cut through conceptual thinking and mistaken perception. She may arise as a human being, a goddess, peaceful or wrathful, or perceived as the general energy play in the phenomenal world.
We will come before the five most potent wisdom Dakini’s and receive their indescribable, palpable, fiercely true transmission during this transmission.