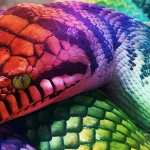 The Rainbow Serpent is the ‘great energy current’ that travels the world from Uluru (Ayres Rock), linking ‘planetary sacred sites’ or chakras, before meeting itself back in Uluru.  On New Years Eve 2019 there was a tremendous electrical storm at Uluru that shook the giant magnetic battery to it's core sending out a sign that something was about to happen!

I understand that the Rainbow Serpent conceived that night, and her newly hatched twelve babies are laying in the bottom of Lake of Rotopounamu in the North Island of New Zealand. The Great Rainbow Serpent is preparing her offspring to swim with her, as a current of thirteen strands traversing the Earth's energy lines, where one serpent will remain in each of the twelve vortexes informing each chakra/sacred site of the new transmission.

Whereas the original Rainbow Serpent will transform into something new!

I believe this new transmission conatains the information for the New Earth. I believe in some distant corner of our consciousness we have agreed to play our part, and to midwife ourselves from one way of life to another.

I feel urged to invite you on this journey as a sacred witness that I feel commences on this Equinox.  All we are being asked to do is witness, and come on the journey.  Join with the serpentine current and come to know this pathway as our second nature as we become Rainbow Serpent Walkers.

In the ancient creation legends of “Dreamtime”, there is a story about a great ritual which has yet to be completed at Uluru. This ritual was meant to complete the great plan of the earth spirit. When the ritual is complete, then perfection will spread throughout the world, and death will disappear from all species. This event is symbolized by a great pole, or cosmic umbilical cord, which is destined to unite the Sun with the Earth – heaven with earth. It is predicted that this cord begins to function in 2020 AD, at the time of the rare Saturn-Pluto conjunction.