12 Days of Christmas: Her Gnostic Practise 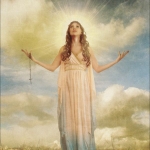 12 Days of Christmas: Her Gnostic Practise

A common belief prevails that December 25th brings the Christmas season to a close – however, this has never been the case in the history of Christianity, especially Gnostic Christianity. Within the Christian Mysteries, this day is the first day of Christmas, a season of twelve holy days leading up to Epiphany on January 6th (which is itself one of the most powerful days of the year).  The Twelve Holy Days of Christmas are a period of deep esoteric significance: a time when the Divine Light is manifesting itself more fully in the world, building and building until its power can be effectually released at Epiphany.

There have been many traditions surrounding the Twelve Days of Christmas throughout history, including the somewhat superstitious belief that each day corresponds to one month of the following year, thereby allowing us to predict the weather for the year, by observing the weather patterns of each of these 12 days.  This is, of course, not a terribly spiritual practice.  A more esoteric historical belief has been that each day is under the direct influence of one of the twelve zodiacal hierarchies.  From the time when the Light of the Christ enters the heart of the world, the planet is swept by powerful solstitial currents which continue throughout the twelve holy days.  Many wondrous workings are possible on the interior plane at this time, and this inner work is the perfect preparation for the Sacrament of Baptism offered at Epiphany: the first, and some may say the most important of rites of initiation.

Another tradition has been to associate each of the 12 days with one of the apostles, meditating on that particular apostle’s life and mission, as well as the qualities they possessed.  However, this year, let's retell this Mystery as seen through Her eyes, heart and womb. By communing with the feminine apostles, upon which there were many,  as we piece the feminine wisdom of Christ back 'together'.

“My beloved! Behold, I shall reveal to you those things that neither the heavens nor their archons have known.”

The 12 Days of Christmas: