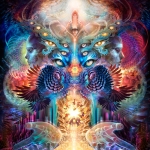 According to the Gnostic Gospel of Philip, an Archon's main objective is to keep humans ignorant of their divine origins beyond the physical universe. They are the seven great influences that make up the Seven Deadly Sins whose transgressions are fatal to our spiritual progress.

Let me just say that again: Whose transgressions are fatal to our spiritual progress.

Many in the New Age will say that these astral creatures do not exist, that it is a figment of our imagination. This my beloved friend is not true. There are plenty of things that exist inside and outside of us and these agents of chaos are very real and are very close in any given moment.

Archons are known as the rulers, servants or influential powers of the "Matrix". They hold the world of control in place, by invoking thoughts, that create emotions that result in actions. If we are not aware, we become their puppets, their playthings motivated by fear and tension.

They answer only to their Creator, something far more destructive than we would ever want to know. It is not worth going there, it's too big, too ancient and too 'everywhere'... but, what we can do is relinquish the archonic ability to hook into our minds and orchestrate our lives in its favour.