In the Beginning, was Man. He was wild and instinctual. Tender and true. He was free to choose and free to live. He was an astonishing light whose birth became Legend, and whose Legend became Myth. 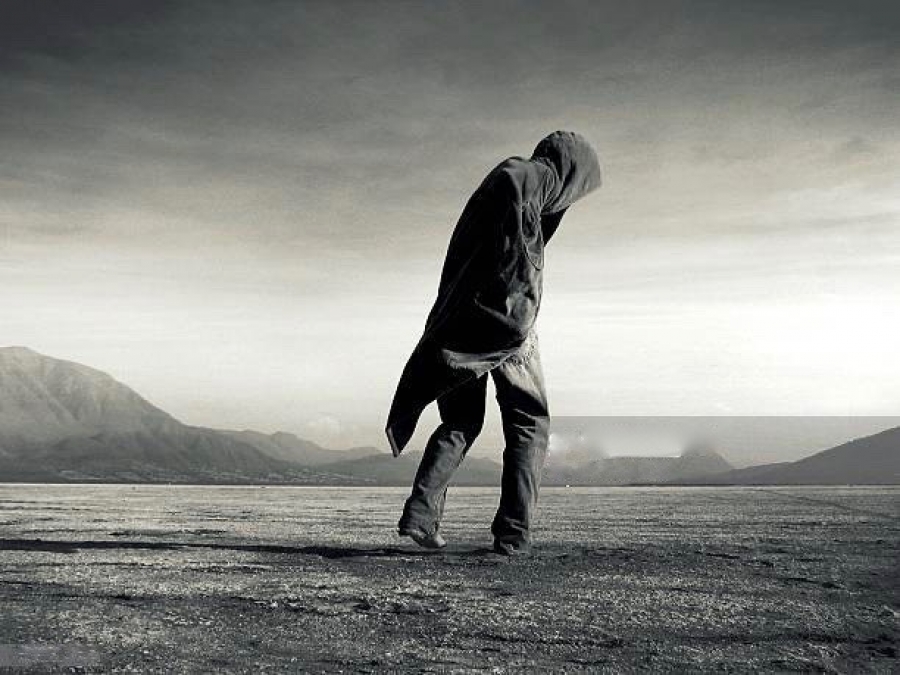 But now He returns. Almost walking amongst us He seeks His neglected parts. Piecing Himself together as He steps over the battlefields searching for survivors from this age-old war. He retrieves the sovereign voices, the shattered hearts, the weary minds and the broken bodies of men. In the quiet and unseen dark, He whispers over the bones of His kin, bringing his brothers back to life with vigour and purpose. He may yet not have a name, or a face, or a role. But he is calling the sons of Men to stand as He. And rise they will.

He cannot show up for us, because he cannot show up for himself (yet). The old masculine principle* is destabilising and falling apart. Every aspect of this worn-out persona is being turned upside down and will eventually wipe itself out. We can all sense the spirit of revolution in the air, and this is how it will end. The new masculine, united and honouring of the feminine will together, overthrow the old.
His very ground of being is shifting and becoming undone, nothing about him feels solid or dependable anymore. Every cell of his being is undergoing this unearthing process. This strikes at the very core of his identity leaving him feeling lost, confused and agitated. All the towers and pillars that once represented good and solid masculine values are now being seen as the corrupt and elitist agenda that they have become.

Encourage Him: to become grounded, bring him back into the natural world daring him to kick off his shoes, as you ask him to teach you to climb or build a shelter. Make a fire, and sleep outdoors. Dream of building a home together, in harmony with nature. Get off the grid, and get a few goats. Drink spring water, and dream, dream, dream. Don't plan, or think figures - just dream and feel the energy arise within you. This dreaming process will open up his root and draw the resources and opportunities toward him.
And maybe, just maybe this is what it takes for him to start believing in himself and the (natural) world again.

The majority of men are widely accepting a sexual dysfunction programme that is held in place by the pornographic industry. This programme that feeds off lifeforce and in return hooks men into a dopamine addiction that not only usurps male lifeforce but destroys relationships by keeping men trapped at the emotional maturity of when he first discovered it.

Encourage Him: to get his head out of porn and reveal the importance of how his most potent lifeforce is in his semen. Get him to read Cupid's Poison Arrow, and say 'we' have been sold a lie, not you, but us, because its the same for the women. The whole world is geared up to ejaculate and orgasm, and that is the trap. We are literally spunking away our lifeforce, and our ability to choose and our ability to see or think clearly. We have been sold a lie, but the majority of us don't want to break with this - but break we must, because our most creative and potent power is held within our sexuality. We have to become conscious of where we are investing our sexual currency. Are we feeding an online death machine, or consciously recycling with an organic and exotic living partner?

Bottom Line: Get him off the Dopamine.

Right Use of Will

The new masculine power that is emerging is yet to find its centre. Previous examples of the right use of will have been good kings, true religion's, honourable armies, and handed down ownership of land or traditions. All of this has been taken from men and placed in the hands of the 1%. The masculine principle is searching for a sovereign power he can believe in and currently, nothing out there is believable. He now has to turn within to find his king, his land, his people and his purpose, a place he has not thought to look for a very long time. His food, his water, his work and his god, have all become polluted, his body is suffering, and his mind has grown darker with time.

Encourage Him: introduce him to energy practices like yoga, tai-chi or kung-fu. Bring him to his breath, reminding him his ability to breathe, is his ability to choose. Take it slow and drop him down a few notches. Encourage him to clean up his diet and drink living water. Identify his Ayurvedic type, not everybody suits raw, vegan food in the beginning. Transverse slowly. Reveal the importance of health and how all disease starts in the gut. Show him some video snippets of the meat and dairy industry, inform him where his food has been coming from - don't be a Nazi. Start in the belly and that man will be reborn.

His heart is leading the way in this great time of change, but he doesn't understand or fully accept it (yet). This new way feels vulnerable and lonely, as his peers and old tribe are fading away. Everything out there seems like a mirage, whereas everything in here is becoming sharp and defined. He can feel the lifting of the Titanic deep within his chest and is both afraid and excited at what might be revealed there. He knows it's the way to go, but the feeling of a near constant emotional pain is something he's not used to. His heart sees and feels yours and is both attracted and resistant. He doesn't believe or feel he could possibly live as openly with as much spirit and trust as you, but he wants to.

Encourage Him: to open his heart to beauty both physical and inner. Remind him of grace, of peace and kindness. Show him humility, and remind him to play often. Make him laugh, loads, bring joy to his day, be spontaneous and playful, encourage him to give himself permission to access his inner child and enjoy. Animals are an excellent way to get into contact with laughter, letting go and bonding. When its time for a decision, ask him to place his hand over his heart and say how does your heart feel? What does your heart choose? Where does your heart want to go?

Bottom Line: It's okay to feel.

His throat is undergoing a significant opening and reordering. Every avenue of lying, cheating, deceiving and being anything less than entirely truthful is arising to be seen in him, and he hates what he sees. He knows he needs to find his voice, the voice of his sovereign self. He despises his puppet voice, the false expression that the system has co-created and shaped for its own end and purpose. He longs to be clear, understood and true but a huge battle will commence for the search of his real voice and relinquishing of the puppet. This battle may destabilise and depress him, but the fruits of this war are worthy, its the furnace in which he finds himself.

Encourage Him: the dietary changes will clear his throat. But the most critical aspect of this journey is for him to remember the importance of his word. Watch movies together that characterise the old values, (or get as close as we can). Martin Luther King, Lord of the Rings or any kind of movie that depicts chivalry, honour and justice. Help him to feel and connect with the true circle of brothers, guys who are walking the path in a juicy and thrilling way. Encourage Men's Groups, and talking with other men. Help him to realise it's not just him, this is a pandemic, and all men are going through this massive change. He will be given such a precious gift once he connects with his men again.

Bottom Line: Be true to your word.

The masculine mind is being upgraded and rewired, taking with him some original instinctual powers connected with the natural world. Men have been sold a lie, and a way of living that severs their connection to nature, almost losing their God-given gifts of instinct and intuition. The masculine mind is sharp and focused, and second to none. His ability to hone in on one subject at a time is his greatest gift. When the masculine sexual prowess, fuses with the clean and natural instincts embedded within his own being, his mind shall glorify and blaze open, and the world will be filled with the wonder of the what he could create.

Encourage Him: introduce him to natural plant medicines, not the hyped up, confrontational medicines, but the ones that bring him down a notch or two. CBD oil, Heavens Tea, Blue Lotus, White Powder Gold (Ormus) are all healing agents that will open his mind to the deep and restorative currents within. Introduce the idea of how human and plant can merge together to heal. The nervous system will fully restore if it hits the theta state. This can be found in darkness, stillness, silence, yoga nidra and contemplative, or reflective thinking. Connect him to his deeper, mystical essence, and in time, he may receive gnosis, his profound connection to himself, and his true origins.

Bottom Line: Step into the zone.

When a man commits to God or the divine force as he sees it, he does so with the whole of his being. His devotion, his faith and discipline are both commendable and admirable. Because the church and so many of our spiritual traditions have incarcerated both man and god, he is finding it difficult to believe and have faith in anything again. Like the 'Root Cause' this is a dangerous place to leave unattended. He must find his God, the true and loving place/face of where he came from because this is where his sovereign power shall flow. Man was severely ripped from the Temple, a place where he could cleanly connect with his soul and find forgiveness. Man's heart has many breakages, the world has deeply harmed him, and so in turn, he harmed the world and everything in it.

Encourage Him: help him find God. Guide him in a true way, not towards yet another fad. Remind him of humility, kindness and all things that are good. Don't bedazzle him with the latest craze in faux spirituality, be honest, bring to him a slow, somatic prayerful route to goodness. Encourage daily prayer, spoken out in humility and vulnerability and lead by example. It has to be real; it has to be felt.

Now, do you understand why he does not show up, and perhaps, it's only now, that we are in a place where we can genuinely encourage him?

Anaiya Sophia is a Myrrhophore (mistress of sacred oils), Mystic and Author of revelatory wisdom. She carries an oral mystery that stirs the remembrance of a continuous lineage with the Feminine Principle that throughout the centuries has preserved its spiritual dignity, without the need for permission or recognition from any other source.

She recognises the need for Initiation and uses the mythical intelligence of her years to orchestrate those Rites of Passage. Her methods carry the hallmarks of a mystic, so unmistakable in today's sugarcoated world of partial truth and placating love. Her ferocious allegiance to direct experience imparts wisdom, lasting transformation and personal depth.

Anaiya lives in the Occitan region of Southern France with her beloved husband Pete Wilson. They run a B & B in the beautiful village of Puivert, called Occitania Bed and Breakfast where individuals and small groups can come and stay.  Anaiya is also able to conduct Baptism, Marriage, Divorce and Death Rite Ceremonies.