I want to tell you a tale of Mary Magdalene and Maximus... 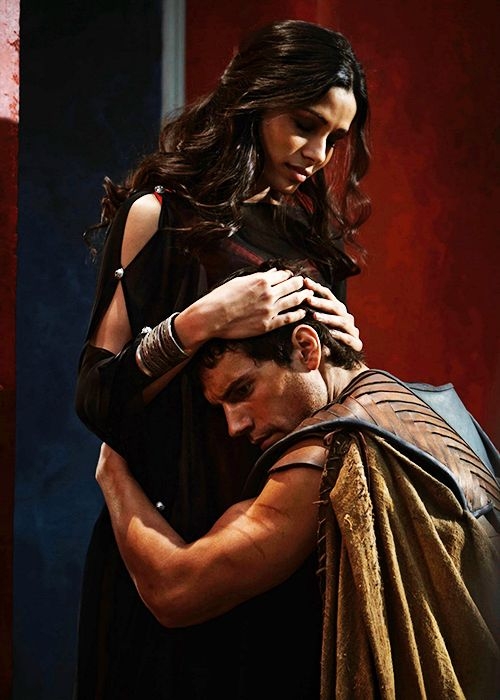 Once upon a time during the crucifixion of Jesus Christ, a Roman centurion called Longinus was instructed to pierce the side of Jesus with a lance.

Being bullish and brutal, he grabbed what would later become known as the spear of destiny and thrust it between Jesus's ribs into his heart. Standing at this side looking up at the saviour's face, he got hit with the first wave of that terrifyingly beautiful transmission. As the spear tip penetrated Jesus's heart, Longinus became saturated, drenched in the Lord's blood. Then, to the immense shock of all who could see, a tsunami of water poured forth from the open wound made by the spear. Blood and water continued to pour all over him, coating his entire body and face in a healing saturation of blessings, mercy and grace.

As this love began to enter him, the horror of his actions became too much to bear, he dropped his lance in utter and insurmountable regret and anguish, knowing now, the truth of this man upon the cross.

Behind Longinus stood another centurion, and he was called Maximus. He was blessed to receive the second wave of this most intimate and merciful transmission. Maximus was a witness to the actions of Longinus, and the grace that responded to those actions. He saw the hate and humiliation that fuelled the thrusting of that lance and the unspeakable mercy that poured from the wound he had inflicted despite Jesus being dead.

Longinus fled from that scene straight into the yawning abyss of the desert where he wandered and crawled his way through many hells and lifetimes. Tormented and destitute, he kept away from others, trying desperately to one day find forgiveness for himself.

Maximus also ran away from the scene, devastated and confused by what he witnessed. But he knew not to run too far away from Mary (Magdalene). He knew that if he could stay just close enough to see her, he would be saved. To Maximus, Mary was his saving grace, his candle, that flickered with the soft, gentle promise of redemption.

And so wherever Mary went, there was always this roman in the background, far, far away, just hanging around hopeful of stealing a glance of Our Lady.

Mary knew what was happening and silently agreed to permit Maximus to follow her at a distance. She knew she was sustaining him, and that his entire afterlife depended upon her. She smoothed him from afar, prayed for him daily, and whispered gentle words to him every hour, of every day.

He never did approach her; he couldn't as he was too racked with guilt and shame. He also couldn't accept her glance; every time there was a chance of connection, he would turn away.

Maximus even followed Mary to France, still hanging around at a distance.

If wasn't until Mary became an old lady, living in the forest of Sainte Baume, that Maximus finally got a little bit closer. He was the only one with her now, and she needed him. She depended upon him, to keep her warm, sheltered and fed. As she now prepared for death, he became her only companion, bringing her food to the cave, and making sure she was comfortable and warm. Still avoiding her face, and from making verbal connection, he silently became her mighty protector.

One day, when the timing was just right, Maximus entered the cave, bringing Mary some food from the village down below. The cave seemed eerily quiet when a sudden clench gripped his gut. In the corner was the slumped body of a frail and tiny lady. Her jar of oil spilling upon the earth, filling the cave with the aroma of spikenard that announced the death of Mary Magdalene.

Dropping to his knees, he finally finds the courage to not only touch Mary but lift her delicate body up and onto his thighs as he rocks her back and forth, sobbing into her hair. In that moment, the immense weight and burden of his suffering fill the cave and the forest down below. All the animals and the birds stop whatever they were doing and bow their heads in solidarity and prayer.

In that delicate and sacred moment, he found the self-forgiveness he was desperate for and realised that it was Mary's last and final gift to him. She knew that her death would be the catalyst for his awakening, and the rising of the man she knew he was. She knew that his self-forgiveness would take a long time because it wasn't just his. She knew his story would last as long as hers, soothing and healing those who heard it, giving them hope, that they too could be forgiven for such terrible actions.